Planet of the Apes & Hollywood Blvd.
So I burned my last Groupon for Hollywood Blvd. I friggen hate that theater. They are so disorganized, the ticket girls are rude, servers slow, and seats are broken. Except for special events (Like Malcolm McDowell at the Palms) , I think I'm done with them.

That said, I saw Rise of the Planet of the Apes with Peanut last night.

I really enjoyed the movie. The 3d rendering was (mostly) believable. It was easy to care for the apes and hate the selfish and brutish humans. The movie was predictable but entertaining. And if you pay attention whenever they have a TV on screen, you'll see bits from other planet of the apes movies (past and future?).

I feel sorry for that kid that played Malfoy in Harry Potter...he grew up to be an ugly guy, and is apparently type cast as a douche.

Movie is recommended and I hope they use this to reboot the series. It's certainly better than that Marky-Mark gets busy with Michael Jackson ape movie:

I'm going to have to go back and watch the original. I'm pretty sure I bought it on DVD intending to have a winter movie ape marathon and just never got around to it. 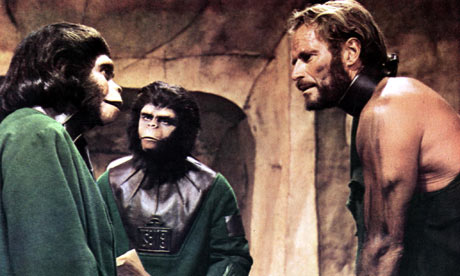