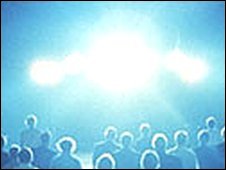 A Jordanian mayor is considering suing a newspaper over an April Fools' Day report saying aliens had landed nearby.

It said communication networks went down and frightened townspeople fled into the streets.

The mayor, Mohammed Mleihan, said parents were so frightened they did not send their children to school that day.

"Students didn't go to school, their parents were frightened and I almost evacuated the town's 13,000 residents," Mr Mleihan told the Associated Press.

"People were scared that aliens would attack them."

He immediately notified the security authorities, who he said combed the area looking for the aliens. They did not find any.

Moussa Barhoumeh, Al Ghad's managing editor, said the newspaper was simply having some good natured fun on April Fools' Day, and had apologised for any inconvenience caused.

"We meant to entertain, not scare people," he said.

Mr Barhoumeh did not say why Jafr was chosen as the butt of the joke, but the area is notorious for a nearby military base that sometimes hosts US troops for joint training exercises.

Human rights groups claim the base once housed alleged al-Qaida militants, some of whom were transferred from Guantanamo Bay, but Jordan has denied the charge.

While April Fools' Day jokes appearing in the press may be a great British tradition, this is not the case in Jordan, says the BBC's Dale Gavlak in the capital, Amman.

While Egyptians are renowned as the big jokers in the Arab world, able to easily laugh at just about anything, the Jordanians are considered more serious.

Although some are trying to change that perception by hosting a yearly international comedy festival in Amman, for Jafr's mayor, this was clearly one joke that just went too far, our correspondent adds.
You better be nice to America or we will bring democracy to your country.
Gone In 3 is offline
Quote Quick Reply