World Cup Football Mania!
It's been an excellent start to the World Cup. Germany, host nation won their opening game against Costa Rica 4-2 (most goals scored in a world cup opening game), England won their match against Portugal, and big upset for Sweden as Trinidad & Tobago (smallest country to qualify for the World Cup) tied their game. Sweden was expected to score around 3-4 goals in the game. 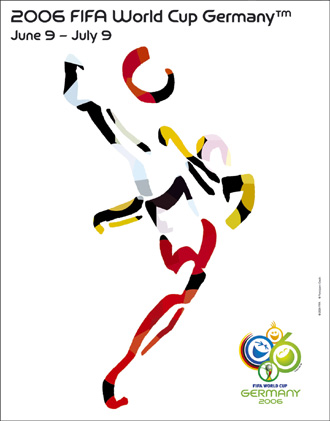 So, for those that dont understand how the World Cup goes, let me explain what I know of it...

32 teams/countries qualify in the past year to take part in the World Cup Finals as such, like the NBA playoffs. It's a big deal just to qualify.

There are 8 groups with 4 teams in each group. In "Group Play" each team will play the other 3 teams in their group. A win gives 3 points, tie gives 1 point each, loss gives 0. The top 2 teams in each group move ahead to the knock-out part of the championship.

So now, there are 16 teams and the winner from each of those games moves ahead into the quarter-finals, then the semis and then the finals. I think that's correct.

The US team played really well in the last World Cup in 2002 and they are out to prove this time around that it wasn't a fluke. You see, the US team didn't quality for the World Cup for 40 years from the 50's to the 90's and as everyone knows, "Football" isn't very big in the US.

The US team this year is very strong, but they have a tough group. I think groups are assigned randomly, but countries are chosen from different continents and it's also based on your country's ranking with FIFA (organizing body). So Brazil wouldn't be in the same group as Germany or England or Argentina (all strong teams).

US vs Czech Republic is on at 11 am this Monday 6/12 on ESPN2. Turn it on at work and support your country!

Brazil's first game is on Tuesday. They play a very exciting game, which should thrill even the non-soccer fans.

Why don't you guys tune into ESPN2 at 8am, 11am and 1pm these coming days to understand why this is called "The World's Game"

Claudia Schiffer at the opening match for Germany

Paraguay player Carlos Paredes (L) is pictured in mid-air after unleashing a shot on goal, under pressure from England keeper Paul Robinson. England beat Paraguay 1-0 in their first Group B game of the 2006 FIFA World Cup. PHOTO / VALERY HACHE

Ecuador forward Agustin Delgado (top) fires the ball past Polands Artur Boruc to give the South Americans a 2-0 lead during their FIFA World Cup Group A match at the Gelsenkirchen stadium, on 09 July 2006. PHOTO JUNG YEON-JE

Colourful samba dancers cheers on Brazil during their 4-0 defeat of New Zealand in Geneva, Switzerland on 04 June 2006. PHOTO/ANTONIO SCORZA

A fan runs onto the pitch to embrace Brazilian striker Ronaldinho (L) during a training session at Thermoplan Arena in Weggis, Switzerland, May 26, 2006. WORLD CUP 2006 PREVIEW REUTERS/Paulo Whitaker

Oguchi Onyewu (R) of the United States National Men's Soccer Team wins the ball against Jorge Rojas (L) of Venezuela during the first half of their friendly match in preparation for the 2006 World Cup at Cleveland Browns Stadium 26 May 2006 in Cleveland, Ohio. AFP PHOTO/David MAXWELL

USA's Landon Donovan takes the ball past Jamaica's Demar Stewart during the friendly match on Tuesday, April 11, 2006 in Cary, N.C. The game ended in a 1-1 draw. (AP Photo/ Karl DeBlaker)
J A Y riding around the world on a 98 Suzuki DR650SE (sanDRina)

Join Date: May 2003
Location: on the move in Texas
Posts: 5,621
Location: on the move in Texas
Sportbike: Hypermotard
Years Riding: since 99'
How you found us: Googled "bullshit artists"
Quote:
Originally Posted by bwa
Horrible start for the Polish.... This is the only time during the year where i hate not having cable...
It's a good reason to go to your local pub!
-Alan-
Balancing the Paradox
of Art and Profit
Dr. D is offline
Quote Quick Reply
post #6 of 37 (permalink) Old 06-11-2006, 09:18 AM
2weelpilot
Registered User

When the tailgate drops..the bullshit stops

And if God told 3 Billion Fans to rise up against the US???
it would make it a very scary place...LOL


Quote:
Originally Posted by flinchy
If God wanted us to play soccer, why did he give us arms?

Quote:
Originally Posted by Wink
Ivory Coast vs. Argentina was a great game yesterday.
Yeah, I like seeing an offensive game, pace was moving all the time. That Drogba... nice punt into the goal there. And awesome to see Diego going wild with Argentina's win.

And Hoslip on the Trinny team, excellent goal keeping


Join Date: Jun 2005
Posts: 2,022
The English look like they are playing well beneath their level..what else is new.

My Argentina is STILL having to tendency to slow down towards the end but they have a strong team so should do well.

Refeering so far from the games I have watched has been less than stellar. Bound to happen but Ive seen more blown calls so far than the last few in the beginning days. Ill cut them slack since its just starting. Once round-robin ends they better get their sh#t together.

Unbelievable that Trinidad tied Sweden..so far def the shocker of the tourny. Good for Ecuador as well, the land of my in-laws

Players REALLY need to stop dropping to the ground like the house has fallen on top of them, every single time they get the slightest touch.

Nice to see Maradona minus 100 pounds and cheering for the team.

Quote:
Originally Posted by cam_neely_8
Players REALLY need to stop dropping to the ground like the house has fallen on top of them, every single time they get the slightest touch.
Yeah, isn't it funny how players get tapped and then proceed with a dive roll and hold the leg in agony... But I saw a few tackles in slo-mo and the guys just get pushed down with the slightest bump, cause I think momemtum has to do with it, two players charging each other or one just slightly tripping the other who's running...

Serbia got a quite a few yellows today.
J A Y riding around the world on a 98 Suzuki DR650SE (sanDRina)

"Emancipate yourself from mental slavery, none but ourselves can free our mind." - Bob Marley
Jammin is offline
Quote Quick Reply
post #13 of 37 (permalink) Old 06-12-2006, 09:58 AM Thread Starter
Jammin
I'd rather be railing :)

Damn, can't believe how excited I am for today's USA game vs Czech

Join Date: Apr 2003
Location: Kalispell, MT
Posts: 13,320
Location: Kalispell, MT
Sportbike: None :(
Years Riding: not long enough
How you found us: Crazeinc
Quote:
Originally Posted by Dr. D
It's a good reason to go to your local pub!
unfortunatelly, most aren't open that early, and if they are, don't have soccer on the tv sets...

btw, USA sucked a lot today.... lost 3:0....
Must be the area where you live. A few bars in my area play the games, even open early for them. We even have every game on in the cafeteria at my work.

Wikipedia - Adrenaline Junkie - An adrenaline junkie is somebody who feels as if they are addicted to adrenaline. Adrenaline junkies may enjoy competing in extreme sports like skydiving, surfing, motorcycle racing, or anything else that gets their heart rate up. This sort of addiction is brought on by enjoying the (adrenaline) "rush" gained from these activities.
AdrenalinJunkie is offline
Quote Quick Reply
post #19 of 37 (permalink) Old 06-13-2006, 07:56 AM
cam_neely_8

BTW did anyone see the last 10 mins of the Japan-Aussie game..WTF happened to the Japanese??!!

Love that Japanese keeper.
Quote:
Originally Posted by Bug View Post
I will sock ya square in your snot locker if you EVER use the term "Bron Bron" in my presence - BAHLEEDAT
Paladin is offline
Quote Quick Reply
post #22 of 37 (permalink) Old 06-20-2006, 10:33 PM
hexraptor
1 piece at a time

Join Date: Sep 2005
Location: SS Barrington
Posts: 17,255
Location: SS Barrington
Sportbike: Inline Two Wheeled
Years Riding: Since the beginning of time
How you found us: Dan Ortega sent me
Great finish! Glad to see the Germans fall. My dad is German and was actually rooting against them. He saw about twenty German flags in the crowd, and then a Nazi flag. He immediately switched teams.

Way to go Italy!
===========
Great Quote - One would think that the Secret Service was smart enough to get serviced secretly.

All the Italian "Social Clubs" {Bookie Joints} are going nuts here.
Quote:
Originally Posted by Bug View Post
I will sock ya square in your snot locker if you EVER use the term "Bron Bron" in my presence - BAHLEEDAT
Paladin is offline
Quote Quick Reply
post #27 of 37 (permalink) Old 07-04-2006, 07:54 PM
Zero
a hollow voice says plugh


Join Date: Jun 2005
Posts: 2,022
Great end to the Italy game. Esp after how the Germans beat Argentina..couldnt have destroyed them better than in the last 2 mins over OT.

Club football is better, but its not the same thing as the World Cup in terms of overall feeling, exactly because it IS every year.
cam_neely_8 is offline
Quote Quick Reply
post #29 of 37 (permalink) Old 07-05-2006, 03:59 PM
Paladin
Hot-Wire Her With A Pin

There has to be a joke in there somewhere.

Quote:
Originally Posted by Bug View Post
I will sock ya square in your snot locker if you EVER use the term "Bron Bron" in my presence - BAHLEEDAT
Paladin is offline
Quote Quick Reply
post #30 of 37 (permalink) Old 07-09-2006, 08:42 PM
Norseman82
Please attend carefully..

"everyone's a nutjob, some just have more restraint than others" - EndlessRR