3 Riders Mowed to Death at a Red Light - Chicagoland Sportbikes 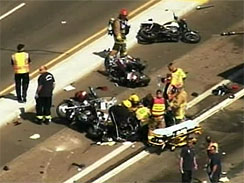 PHOENIX  A group of eight motorcycles stopped at red light in north Phoenix were mowed down from behind by a dump truck early Thursday afternoon, killing three riders and injuring six others, at least one critically, authorities said.

The motorcyclists were stopped behind a pickup and a small SUV at the red light when the truck driver rammed them from behind, he said. The truck ran over the motorcyclists and continued into the small SUV in front of them, Holmes said.

There was no sign the truck driver was impaired.

Some of the motorcycles burst into flames under the dump truck, while others ended up scattered behind the truck. Television images of the crash site showed a horrifying collection of mangled chrome Harley-Davidson bikes and scattered personal belongings, including pairs of riders' boots laying in the roadway.

Some of the injured were airlifted to St. Joseph's Hospital in Phoenix, Salomon said.

The crash occurred about 1 p.m. at the intersection of 27th Avenue and the Carefree Highway. Holmes said at least one of the victims was a woman, but most were men.

Jarrod Cook, a worker at the nearby Ketzal Mexican Grill, said he saw several motorcycles wedged underneath the garbage truck, which caught fire.

"The first thing we saw was a big puff of smoke when the truck lit on fire," he said.

Cook said he walked over and witnessed a chaotic scene with some of the injured lying on the ground.

Dozens of police and rescue personnel responded to the crash.

The 50-year-old driver of the truck was not injured and was being questioned by police. Those in the pickup and SUV also were not hurt.

The Carefree Highway was expected to be closed for several hours as police investigate the crash.
You better be nice to America or we will bring democracy to your country.
Gone In 3 is offline
Quote Quick Reply
post #2 of 53 (permalink) Old 03-25-2010, 07:12 PM
streetracin1820
^^^Bad for your hearing

WOW!! is all i can say, May thoes who have been killed rest in peace, and may thoes who are injured have as speedy a recovery as possible

Prayers sent for all involved
Everyone needs a healthy way to relax, mine Church, and two wheels, a stretch of winding road, and a pipe loud enough to give me headaches and make squirrels explode. (Fixed curtousey of PWRMAD)

Nothing is impossible the second we say ill try your already admiting you can be defeated, and the second you say i cant or its to hard youve already failed.
streetracin1820 is offline
Quote Quick Reply
post #3 of 53 (permalink) Old 03-25-2010, 07:13 PM
Odysseys
YO MAMA

Wow. That is messed up.

With fuel prices so high more and more trucking companies are not keeping up with maintenance, the trucks brakes were prob shit.
06 Sunburst Orange Ninja Zx6r, 06 1250 Sportster.

Was the dump driver texting, on the phone or asleep?
Everyone Exaggerates

Join Date: Sep 2004
Location: PF
Posts: 12,489
Location: PF
Sportbike: Slow
Years Riding: all of them
How you found us: a real person
What a horrible way to go.

A friend of mine has driven dump trucks for several different companies for years. Almost every company he has driven for has very ill maintained trucks whether it's bad brakes or suspension. He said it's horrible being in a loaded truck and unable to stop. I wonder if it was neglegence on the truck drivers behalf or bad equipment. Regardless, if I was that truck driver I would feel grief for the rest of my life.

Quote:
Originally Posted by Tacitus
In a state where corruption abounds, laws must be very numerous.
Cerk is offline
Quote Quick Reply
post #10 of 53 (permalink) Old 03-25-2010, 08:10 PM
JRobbins
I am the Stig.

Join Date: Nov 2008
Location: Chicago
Posts: 3,763
Location: Chicago
Sportbike: 09' Triumph Daytona 675, 06' Triumph Thruxton, 74' CB360
Years Riding: Some say he's been ridin motorcycles since before they were invented... all we know is he's the Stig
How you found us: Met Chills while rockclimbing.
fuck thats messed up
GO
HAWKS!

Join Date: Sep 2008
Location: Chicago
Posts: 1,599
Location: Chicago
Sportbike: 2008 Suzuki GSX R600
Years Riding: Long enough to know that stupid hurts.
How you found us: shawnb114 invited me on a cruise and I was hooked.

Thoughts and prayers go out to those affected.

Crikey... what the hell was that driver doing?!?!

Join Date: Sep 2007
Location: Phoenix, AZ
Posts: 2,410
Location: Phoenix, AZ
Sportbike: 2008 Tuono 1000 R
Years Riding: 12 years
How you found us: GSXR.com
Word out in AZ is the the driver was "looking at paperwork". I guess that is the male equivalent of "putting on lipstick". Brake failure isn't out of the question. However, the truck appeared to be unloaded. so it doesn't seem likely.

There is nothing firm, nothing balanced, nothing durable in all the universe. Nothing remains in its original state, each day, each hour, each moment, there is change. Change is the essence of life. Embrace change as you do life. To fight change is to live in the past.
Blade Runner is offline
Quote Quick Reply
post #21 of 53 (permalink) Old 03-26-2010, 06:47 AM
scout67
Sarcasm in every post.

my prayers this morning for everyone involved and their families and loved ones. sounds like he also hit a suv, a pick up truck and a sedan in FRONT of the motorcycles. how incredibly horrible.

In what police described as a "horrific accident," eight motorcycles carrying nine people were stopped at the intersection of 27th Drive and Carefree Highway on Thursday afternoon when the truck barreled through, pinning three bodies underneath before bursting into flames, police said.

Witnesses described a chaotic scene where many tried to help until rescuers arrived.

"I grabbed all the water I could and took blankets because there were bodies everywhere. It was horrible," said Lynn McDowell, an employee of a nearby Walgreens drugstore.

Three people were pronounced dead at the scene. Six more were in critical condition, including a veteran Phoenix fire captain who was taken into surgery Thursday afternoon, said a Phoenix Fire Department spokesman. A medical helicopter landed at least twice to transfer victims to the hospital.

The truck driver and fire captain were not immediately identified. Identities also were pending late Thursday on the other victims in the crash.

"As a motorcycle officer and motorcycle rider, I have never seen such a horrific accident," Phoenix Police Chief Jack Harris said.

After the truck hit the motorcycles, the truck burst into flames and hit a sport-utility vehicle, a pickup and a sedan that were in front of the motorcycles. No one in those vehicles was injured, said Phil Dyer, a spokesman for the Daisy Mountain Fire Department, which also responded to the crash.

Afterward, the Blue Sky Sanitation truck was smoking, and popping could be heard before the fiery explosion. Witnesses saved at least two people who were near the truck by pulling them to safety.

At least 50 firefighters and two ladder crews responded to the scene. Dozens of onlookers gathered around the wreckage.

Tania Krukoff, an employee at the Walgreens at 27th Drive and Carefree Highway, said she was on break and returning from filling her tank at a nearby gas station when she saw the scene.

"There were no police here," she said. "There were bodies everywhere."

"There was a fire right after the accident," Krukoff added. "Three of the motorcyclists' bodies were underneath the truck and on fire."

Krukoff said she talked to the truck's driver.

"He was in shock," she said. "I didn't smell no alcohol. He told me he wasn't paying attention, just shuffling with his paperwork."

Police said the initial investigation found no evidence the driver was impaired.

The truck driver "got out of the truck and tried to help the people under the truck," said McDowell, the other Walgreens employee.

"The flames were so high you couldn't get close," she said.

She and others took fire extinguishers from Walgreens to try to extinguish the flames.

Witnesses described the loud sound of the crash.

"It was like a gunshot," said Mike Nash, who lives nearby and came out to help. "It sounded like explosions going off in a series. It sounded different than your normal or conventional crash."

Twenty-three-year-old Maritza Lomba, who works at a nearby Peter Piper Pizza, said: "We were sitting in Peter Piper Pizza, we see this puff of black smoke. People started trickling out to see, and the fireman, he was spraying at the front of the truck.

Man that breaks my heart...

And another thing for me to worry about when Peanut and I are out and about.

Quote:
Originally Posted by ninjaeric View Post
"He told me he wasn't paying attention, just shuffling with his paperwork."
Negligence... pure, unadulterated, mother-god-damn-fucking negligence. If the bikers weren't there, he'd have still plowed into the vehicles in front of them.

We don't know what kind of man this driver is. He could be a saint. But today, he made a huge mistake... and must pay the price. Justice demands to be served.

This CBS article seems to blame the motorcycles, bullshit.

Join Date: Nov 2008
Location: Chicago
Posts: 3,763
Location: Chicago
Sportbike: 09' Triumph Daytona 675, 06' Triumph Thruxton, 74' CB360
Years Riding: Some say he's been ridin motorcycles since before they were invented... all we know is he's the Stig
How you found us: Met Chills while rockclimbing.
Holy shit I just found out one of my friends was on one of the bikes. He has a broken arm and leg but other than that he's okay, but in intensive care.
GO
HAWKS!

Join Date: May 2006
Location: Alaska, WI
Posts: 15,710
Location: Alaska, WI
Sportbike: 2016 Honda Africa Twin & 1979 Honda CB750F
Years Riding: long enough to have fallen off a few times - glad I wear a helmet!
How you found us: Loose Lips Sink Ships, Loose Wires Cause Fires
Horrible. Absolutely horrible. This and an 83 or whatever year old crosses the center line in a mini-van and kills a teenage bicyclists and injures two others.

This CBS article seems to blame the motorcycles, bullshit.

Quote:
Originally Posted by jrock View Post
Horrible. Absolutely horrible. This and an 83 or whatever year old crosses the center line in a mini-van and kills a teenage bicyclists and injures two others.


I don't see it.
The wording in the article title and in the first paragraph, "when several motorcycles collided with a truck", makes it sound like the motorcycles caused the crash or were the ones to crash into something..

Then they go on to say "It appears the garbage truck collided with the group of motorcyclists"..wtf?
- Steve
hexraptor is offline
Quote Quick Reply