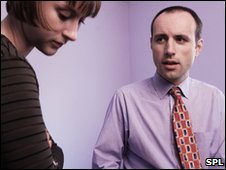 A nasal spray can make men more in tune with other people's feelings, say a team of German and UK researchers.

They found that inhaling the "cuddle hormone" oxytocin made men just as empathetic as women.

The study in 48 volunteers also showed that the spray boosted the ability to learn from positive feedback.

Writing in the Journal of Neuroscience, the researchers said the spray may be useful for boosting behaviour therapy in conditions such as schizophrenia.

Oxytocin is a naturally produced hormone, most well-known for triggering labour pains and promoting bonding between mother and baby.

But it has also been shown to play a role in social relations, sex and trust.

In the first part of the study, half the men received a nose spray containing oxytocin and half were given a dummy spray.

They were then shown photos of emotionally charged situations including a crying child, a girl hugging her cat, and a grieving man, and were asked questions about the depth of feeling they had towards the subjects.

Those who had the hormone spray had markedly higher levels of empathy - of a similar magnitude to those only usually seen in women who are naturally more sensitive to the feelings of others.

Neither group were able to accurately guess whether they had received the oxytocin or the dummy spray.

In a second experiment, the researchers measured "socially motivated learning" where the volunteers were asked to do a difficult observation test and were shown an approving face if they got the answer right and an unhappy face if they got it wrong.

In these types of experiments, people generally learn faster if they get positive feedback but those who had taken the oxytocin spray responded even better to facial feedback than those in the placebo group.

Professor Kendrick said the oxytocin spray may prove to be useful in people with conditions associated with reduced social approachability and social withdrawal, such as schizophrenia.

And other researchers are already looking at its potential use in autism.

"The bottom line is it improved the ability of people to learn when they had positive feedback and that is pretty important because this might help improve the effectiveness of behavioural therapy or even be useful in people with learning difficulties."

He added there has been a lot of interest recently on oxytocin and social behaviour.

"This study is the latest of several that suggest that intranasal oxytocin seems to 'sensitise' people to become more aware of social cues from other individuals - and more likely to be sympathetic to them."
You better be nice to America or we will bring democracy to your country.
Gone In 3 is offline
Quote Quick Reply
post #2 of 19 (permalink) Old 04-30-2010, 12:26 PM
Thunderstruck
Thee original azzhole!

I need a hug now
...plus my gf was with me saying "omg slow down, slow down" and I was thinking "Lose annoying squalk box in passenger seat, afford more mods and have less weight in the car and on the back of the bike"...so i dumped her and I'm single again as usual...HERE KITTY KITTY!!!

Quote:
Originally Posted by Arch View Post
pussy is the root of all evil...
Quote:
Originally Posted by Hunny View Post
mmmm pussy
You dont like me....i dont give a fuck...cause i'll still put ya in the hospital...me tollerating you is all that matters...
Thunderstruck is offline
Quote Quick Reply
post #3 of 19 (permalink) Old 04-30-2010, 12:55 PM
ramenboy...
Registered User

Join Date: Oct 2009
Location: River forest il
Posts: 2,760
Location: River forest il
Sportbike: triumph speed four
Years Riding: 1 year
How you found us: fell asleep on my softail and woke up here
Quote:
Originally Posted by spoil9 View Post
So how long till this is added to the pages of Maxom or FHM? You open up the mag to look at the *articles* and next thing you know you want to hug someone.
maybe a scratch and sniff ad...
visor down
nesba #608
ramenboy... is offline
Quote Quick Reply
post #10 of 19 (permalink) Old 04-30-2010, 01:26 PM
Kegger
King Nothing

My wife once said that if she wanted an empathetic pussy, she would have married a girl.

Join Date: Apr 2005
Location: Gold Coast
Posts: 32,752
Location: Gold Coast
Sportbike: Sportbike?
Years Riding: No F'in Idea
How you found us: 4 & 6
If this goes on sale, I can already see a spike in "Dashboard Confessional" Record sales
"Life is not a journey to the grave with the intention of arriving safely in a pretty and well preserved body, but rather to skid in broadside, thoroughly used up, totally worn out, and loudly proclaiming WOW, what a RIDE !!"
Bug is offline
Quote Quick Reply
post #14 of 19 (permalink) Old 04-30-2010, 04:25 PM
suh-c
Registered User

This apartment is starving for an argument, anything at all to break the silence
"Life is not a journey to the grave with the intention of arriving safely in a pretty and well preserved body, but rather to skid in broadside, thoroughly used up, totally worn out, and loudly proclaiming WOW, what a RIDE !!"
Bug is offline
Quote Quick Reply
post #16 of 19 (permalink) Old 04-30-2010, 04:27 PM
suh-c
Registered User

"Life is not a journey to the grave with the intention of arriving safely in a pretty and well preserved body, but rather to skid in broadside, thoroughly used up, totally worn out, and loudly proclaiming WOW, what a RIDE !!"
Bug is offline
Quote Quick Reply
post #19 of 19 (permalink) Old 04-30-2010, 08:09 PM
beac83
Registered User