Never a bad time to climb... unless the weather is really horrible, and then you climb inside!

Just went through the gallery(s) on his site. TT guys are truly a whole different breed.

There is nothing firm, nothing balanced, nothing durable in all the universe. Nothing remains in its original state, each day, each hour, each moment, there is change. Change is the essence of life. Embrace change as you do life. To fight change is to live in the past.
Blade Runner is offline
Quote Quick Reply
post #10 of 19 (permalink) Old 09-19-2005, 03:04 PM
ashwingop
i need a new bike, this one is trashed

Join Date: Jan 2004
Location: Gurnee
Posts: 416
Location: Gurnee
Sportbike: '04 600RR
Years Riding: 20
How you found us: search
When Richard Britton lost his life at the new Ballybunion Road Races on Sunday, the sport he had devoted his life to lost one of its most loyal and talented servants.

Richard was one of the most naturally gifted riders of his generation, spending a decade racing at the highest levels of road racing winning at national races throughout Ireland and tasting international success at the North West 200 winning the 2000 Production Race. He was a double Irish and Ulster road race champion and he also won the Regal 600cc series on four occasions and was a podium finisher at both the Isle of Man TT and Ulster Grand Prix.

The maverick Eniskillen rider was the fans favourite and the peoples champion in Ireland. He was ever cheerful with a quick wit and lived for his racing. He loved his racing. It didnt always matter to him whether or not he won or came tenth; as long as he was on his bike he was having fun, much like his hero the great Joey Dunlop. He went about his business the way he wanted and wouldnt be pressurised into doing something he didnt agree with. He wasnt a big trainer; he once told us that he went to the gym once but it nearly killed him; but it was that carefree attitude which harked back to a more laid back time in road racing, which made Richard stand out, and which made him so popular with the fans and with his rivals.

As good as Richard was at racing motorcycles, he was better at being a father and a husband. Little Loris is almost as well known around the paddocks of Ireland as his daddy was, and Richard doted on his little rascal. He was just as dedicated to his wife Maria and never went anywhere without his wedding ring. In 2004 his finger swelled up at the TT and his wedding ring was hurting him and he had to take it off. He wouldnt race without it though and attached it to his dog tags as he headed out for another encounter with the Mountain Circuit.


Standing together
Side by side
Staying true to whats inside
United as one, we fight

The TT is run on public roads, complete with drain covers, manhole covers, lumps, bumps and uneven surfaces. For practices or for the actual races, the TT course is closed to the public. Race direction and marshalling are superbly organized and I believe the new rules mean that each marshal can see the next both up and down the track. Thats a few more Marshals than Wyatt Earp had. There are also rider Marshals who do a lap of the circuit both before and after each race / practice. They are all ex-racers and they go round at near race speeds. These guys know every inch of the track and are pretty spectacular to watch.

Racetracks have run-off areas, gravel traps etc. The TT doesnt. The only protection is straw bales round things like telephone boxes, telegraph poles, bus stops etc. Dropping a bike on a racetrack can turn out OK but at the TT, the consequences of a rider coming off really dont bear thinking about.

Listening to an ex-racer (Steve Parrish) on TV talking about the TT, he reckoned that although riders are supposed to be riding at only 95%, he wasnt sure about this. Let me tell you, if they rode at 75% on this course, they would still all deserve medals! 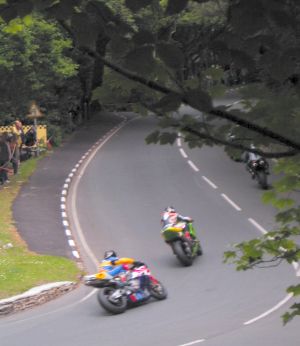 Believe nothing, no matter where you read it, or who said it, no matter if I have said it, unless it agrees with your own reason and your own common sense. ~ Buddha
tWisTEd is offline
Quote Quick Reply
post #16 of 19 (permalink) Old 09-19-2005, 07:50 PM
Kim
Registered User