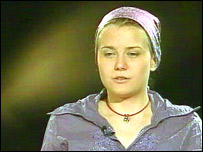 Interview clips
An abducted Austrian teenager held captive for eight years has said fear of her captor prevented her from trying to escape her basement prison.

In her first TV interview since escaping, Natascha Kampusch said she was "distraught and angry" in her cell.

But, she said, her captor had told her he would go on a killing spree if she tried to escape.

Millions of Austrians are thought to have watched Ms Kampusch's interview with state broadcaster ORF.

Ms Kampusch fled the basement prison where she had been held for eight years since her abduction as a 10-year-old in late August.

Her abductor, Wolfgang Priklopil, committed suicide after her escape.

Ms Kampusch frequently shut her eyes against the bright camera lights during her 40-minute interview with Austrian TV.

ORF said her eyes were sensitive after being confined in dark conditions for so long.


Sometimes I dreamt that if I owned an axe, I would chop his head off
Natascha Kampusch

She describes fearing she would go "crazy" when she was first led to the tiny cell where she would remain for the next eight years.

She said she threw water bottles against the wall and tried to make as much noise as possible to alert her neighbours.

Appearing composed, if somewhat delicate, in front of the cameras, Ms Kampusch said she dreamt constantly of escaping.

"I promised myself I would grow older, stronger and sturdier to be able to break free one day," she said.

However, she said, she feared her abductor's response if she tried to escape.

"I wasn't scared [for myself] - I love freedom and for me death is the ultimate freedom, the redemption from him," she said.

"But he said all the time he would first of all kill the neighbours, then me and then himself."

In her interview with News magazine, Ms Kampusch described her frustration at her ordeal.

"I asked myself over and over again: 'Why me?' Among the many millions of people in the world, why did this happen to me? I always had the thought I was not born into this world to be locked up and to allow my whole life to be ruined.

"I despaired over this injustice. I felt like a poor battery hen or battery chicken. You have obviously seen my dungeon on television and in the media, so you know how small it was. It was desperate."

About her abductor, she says: "I had the choice either to be alone or in his company. And these alternatives were not very enticing."

She then goes on to defend him but says she dreamt about chopping his head off:

"You shouldn't talk to me so much about Mr Priklopil because he cannot defend himself any more. I don't find it very nice to complain about a dead person...

"I had bad thoughts. Sometimes I dreamt that if I owned an axe, I would chop his head off."

In the interview with Kronen Zeitung, she said she had tried to jump out of Mr Priklopil's car, "but he held me back and then sped away".

She did not say when the failed escape attempt occurred.

The two press interviews were given in return for a package including housing support, a long-term job offer and help with her education, Reuters news agency reports.

In the TV interview, the girl described how she tried to signal for help with her eyes during occasional outings with her abductor, ORF says.

"She told me... she made eye contact with people time and again and wanted to signal them: 'Please help me.' And nobody reacted," said ORF's Christoph Feurstein, who interviewed Ms Kampusch.

"There were moments in the interview that really gave me the creeps," Mr Feurstein said.

"She was not disguised or hidden. You could see her normally," Mr Krause said.

"There were no tears, there was no interruption. She went through this one-hour interview in a very straightforward way," she told the BBC.

She said the kidnap victim had revealed details about the conditions imposed upon her.

"She was kept in this very small room and when she did not obey, he simply turned down the lights for two days, three days, whatever he felt like... She obviously realises this was totally wrong what he did."
bwa is offline
Quote Quick Reply
post #2 of 13 (permalink) Old 09-07-2006, 07:14 AM
Chills
Moderator

I forecast a lifetime of therapy.

I thought Europeans were too refined to pull this kind of crap. One would think only Americans are boarish enough to do this.

Never a bad time to climb... unless the weather is really horrible, and then you climb inside!

Join Date: Aug 2002
Location: Aurora
Posts: 2,560
Location: Aurora
Sportbike: 99 SV650, z50r
Years Riding: A few years
How you found us: A tranny told me
They are saying that she's actually pretty well adapted. But who knows, I'm sure she'll be in therapy forever. The more I read about this story the more surreal it seems.
Flying_Hellfish is offline
Quote Quick Reply
post #6 of 13 (permalink) Old 09-07-2006, 10:40 AM
samal
Jewrassic Park Runaway

Therapy is an American invention - in Europe, she will get her a scooter, go to Amsterdam and be cured in no time...they are all crazy anyway, you know...

Join Date: Aug 2002
Location: Aurora
Posts: 2,560
Location: Aurora
Sportbike: 99 SV650, z50r
Years Riding: A few years
How you found us: A tranny told me
Quote:
Originally Posted by samal
Therapy is an American invention - in Europe, she will get her a scooter, go to Amsterdam and be cured in no time...they are all crazy anyway, you know...

. And since when does a vespa not make everything better? It's a great idea.

Anyway, the first statement that was released was from her therapist about a week or so ago who said that she was stable but may have a few signs of stockholm syndrome.
Flying_Hellfish is offline
Quote Quick Reply
post #8 of 13 (permalink) Old 09-07-2006, 12:36 PM
norton
Listen to Motley Crue

. And since when does a vespa not make everything better? It's a great idea.

Anyway, the first statement that was released was from her therapist about a week or so ago who said that she was stable but may have a few signs of stockholm syndrome.
Nah, Freud was not American, thats why he never commercialized the idea to the point of listening to somebody blabbing away laying on the couch for $200/hour...