Wut! Leave it to GM and Segway to screw the motorcycle up - Chicagoland Sportbikes

Wut! Leave it to GM and Segway to screw the motorcycle up

I still want to ride one though

hahahah
Actually looks fun ... I am not denying this thing is probably going to be all kinds of fail.. especially in the US.. but euros are a bit more progressive.. maybe they'll embrace it.. 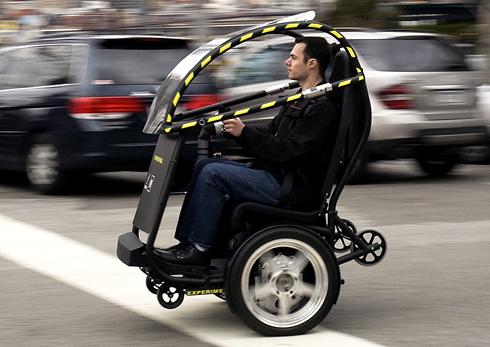 The companies plan to announce the partnership Tuesday in New York, where they are testing a prototype of the partially enclosed, two-seat, two-wheel scooter. The venture is called Project PUMA, for Personal Urban Mobility and Accessibility.

The companies hope to recruit partners, such as cities or colleges, to set up Puma travel lanes, like bicycle lanes. They'd be used to test the vehicles and their on-board wireless communicators designed to keep them safely apart and even operate them while drivers do other tasks.

The Pumas also could be operated manually. Not intended for highway use, they would hit about 35 miles per hour and go up to 35 miles on a charge.
FIND MORE STORIES IN: New York | China | General Motors | India | Segway | Pumas | Accessibility

"There's no technology that has to be invented here. It's really just putting the pieces together," says Chris Borroni-Bird, director of the project for GM.

Nonetheless it could take years to get to market. "It's not going on sale anytime" soon, he said.

The partnership with Segway began about 18 months ago, predating GM's emergency survival loans from the government.

GM is developing the electronic wireless systems for safe, autonomous operation. Segway is responsible for the self-balancing, electric, two-wheel chassis. The prototype has "training wheels" front and rear, helpful at stoplights. Pumas would use lithium-ion batteries, like those Segway uses in its stand-up scooters.

Though being unveiled in New York, the Pumas might appeal most in densely packed cities in places such as India and China, Borroni-Bird says. There they would seem a big step up from bicycles. Americans, who are used to cars, might not take them as seriously.

He forecasts energy consumption equivalent to 200 miles per gallon of gasoline. That falls to about 70 mpg adding in fuel to generate electricity used to charge its battery.
iamnotgreg is offline
Quote Quick Reply
post #2 of 10 (permalink) Old 04-07-2009, 10:28 AM
Pinto Bean
So long San Diego :(

Kids in back seats cause accidents, Accidents in Back seats cause kids.
Pinto Bean is offline
Quote Quick Reply
post #3 of 10 (permalink) Old 04-07-2009, 10:31 AM Thread Starter
iamnotgreg
Registered User

kinda reminds me of something...
oh yea
that's it

Join Date: Aug 2006
Location: Middleburg, Florida
Posts: 19,055
Location: Middleburg, Florida
Sportbike: '74 Yamaha RD350
Years Riding: idk
How you found us: Google
Ever ride a segway? I have, they take some getting used to. Disneyworld has an experience, it is $80, and you get a segway class, then free roam of World Showcase at Epcot before it opens. I may do it this year.
Dave13 is offline
Quote Quick Reply
post #6 of 10 (permalink) Old 04-07-2009, 12:22 PM Thread Starter
iamnotgreg
Registered User

Quote:
Originally Posted by Dave13 View Post
Ever ride a segway? I have, they take some getting used to. Disneyworld has an experience, it is $80, and you get a segway class, then free roam of World Showcase at Epcot before it opens. I may do it this year.
It's actually kind of fun if you can get past the "oh my god i am such a dork" part of it

I did the lakefront segway tour.. It would have been a lot more fun if they didn't give all of us the crappy key .. only the guide got the good key.. but she let me ride hers

we had one kid face plant something fierce on one.. It was NASTY
He was playing around zigging and zagging and then.. I don't know what he did.. but it stopped and it looked like it whipped him straight down to the ground face first..
iamnotgreg is offline
Quote Quick Reply
post #7 of 10 (permalink) Old 04-07-2009, 12:33 PM
C2M
ǝɹoɯʎuɐ ʞɔnɟ ɐ sǝʌıƃ oɥʍ

Join Date: May 2007
Location: Crook county
Posts: 11,372
Location: Crook county
Sportbike: 636/ zzr600/ r6
Years Riding: Since 07
How you found us: bathroom stall
Segways are fun
go time traveler style and go back in time, fuck his grandma, then shoot forward in time and then fuck his mom. Then return back to present state and call him a the product of two incest whores and hes your son and show video of you plowing the both members of his family. .
C2M is offline
Quote Quick Reply
post #8 of 10 (permalink) Old 04-07-2009, 12:33 PM
Dave13
Armed law abiding citizen

Join Date: Jun 2008
Location: westmont
Posts: 1,432
Location: westmont
Sportbike: gxr600k8
Years Riding: 4yrs
How you found us: newenough.com
why are all these new type moving thingies (as i'm not sure what to call them) will only be good for hot dry places. most don't have an enclosed cockpit or look like they can handle snow yet alone rain . what happens when a SUV hits you does it do like the demolition man thing with foam filling up to protect you cuz i'd say your a goner otherwise
i want to drink, but only to kill a certain few brain cells and i don't care how many i have to take out to get to them.

Quote:
Originally Posted by Dave13 View Post
They look like a hoot to ride. Does Paul have one to bring to bike nite for us?